Hello, you are using a very old browser that's not supported.
Please, consider updating your browser to a newer version.

Keeping People Covered: Medicaid During COVID-19 and Beyond

Medicaid is the single largest provider of health insurance in the United States, covering over 75 million people. Research has shown that continuous health coverage is critical for good health outcomes — especially for vulnerable populations such as children and people with chronic health conditions. Staying enrolled in Medicaid can be extraordinarily challenging and losing coverage has been shown to increase healthcare costs and result in worse health outcomes due to gaps in access to care. Unfortunately, losing Medicaid is all too common for low-income individuals — so common that there’s a term for the process by which individuals cycle on and off enrollment: Medicaid churn. 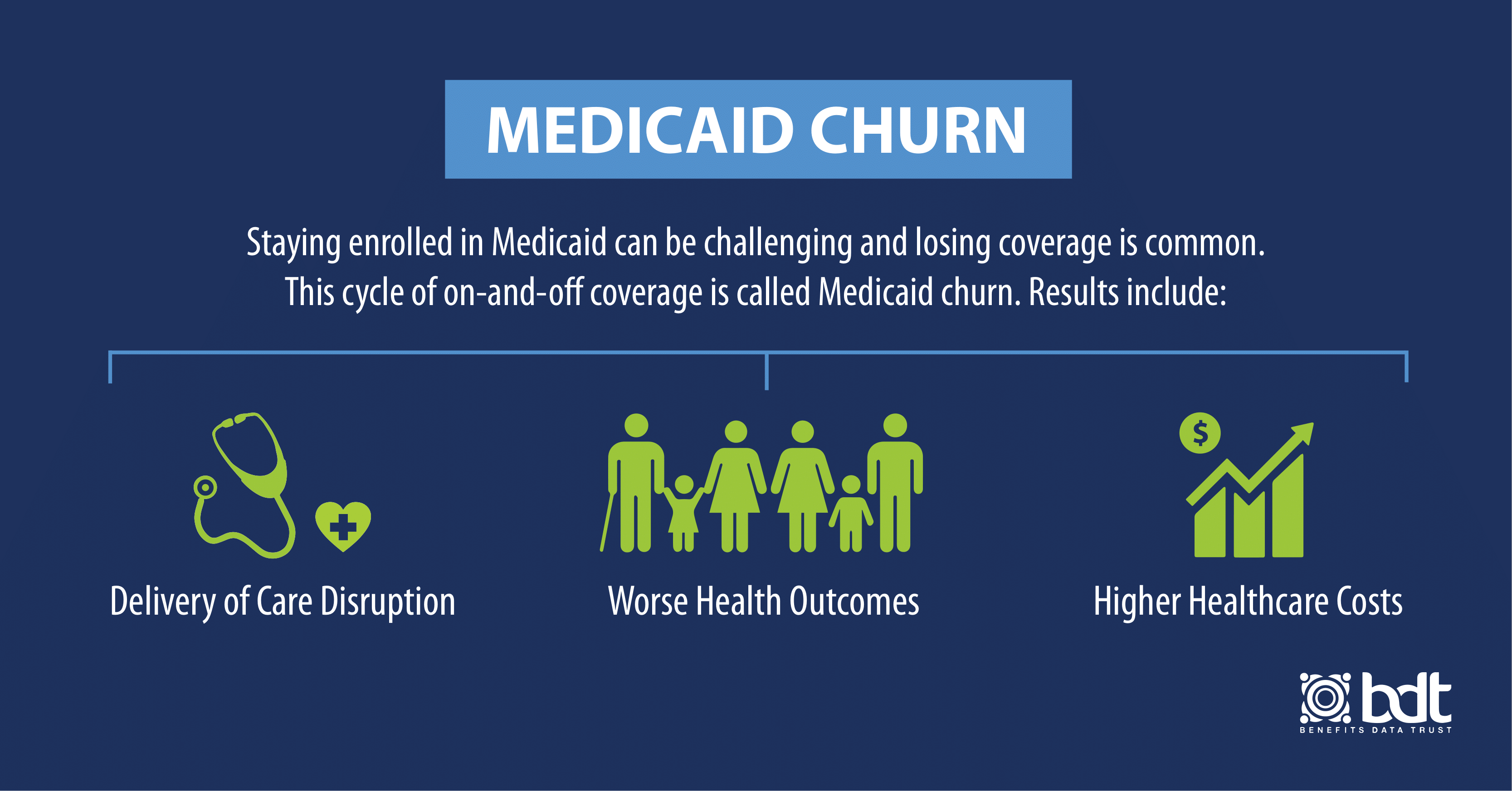 Due to the COVID-19 pandemic and subsequent public health emergency (PHE), states have the opportunity to build on the temporary federal flexibilities that have eliminated churn by exploring more permanent policy and practice solutions. Many of these state options could remain in effect after the end of the PHE, thereby producing long-term positive effects on Medicaid beneficiaries and the healthcare system overall. While some churn is inevitable — changes in circumstances result in changes in eligibility — studies have shown that churn is often driven by administrative barriers that states can remove.

One of the key challenges to understanding the true burden of churn is the lack of standardization in how churn is defined (e.g., short-term vs. long-term churn) and measured. One study using data from the 2000-2004 Medical Expenditure Panel Survey (MEPS) estimated that prior to the enactment of the Affordable Care Act (ACA) in 2010, 43 percent of Medicaid enrollees experienced at least one episode of churn within 12 months, compared to 12 percent for individuals with employer-sponsored insurance. After the enactment of the ACA, both Medicaid coverage disruptions and coverage loss declined by 4.3 percent in states that expanded Medicaid.

However, new data has shown that states’ increased implementation of restrictive eligibility and enrollment policies and practices have presented a significant barrier for beneficiaries causing them to lose coverage. For example, the increased utilization of periodic eligibility checks as a program integrity strategy has resulted in declines in overall enrollment. Similarly, the implementation of work requirements, also known as community engagement programs or activities, has also had significant negative impacts.

Under the ACA, income-eligible Medicaid beneficiaries must have their coverage renewed every 12 months, using available data and automated processes where possible. Still, states have the freedom to conduct periodic data checks to assess whether enrollees remain eligible for the benefit. If an individual is deemed ineligible, states must afford the beneficiary the opportunity to provide the necessary information to confirm continued eligibility.

Despite this opportunity, many states allow only 10 days for that verification submission; this short timeline poses significant challenges, as individuals may have difficulty compiling the information required, understanding the notices received — especially if English is not their primary language — or may not receive the notices for numerous reasons, including housing instability. Additionally, since eligibility is based on an individual’s current income, fluctuations in earnings can result in disenrollment with individuals becoming eligible again soon after they’re disenrolled. This barrier has been particularly troubling during the current pandemic, as the numerous national shutdowns have drastically impacted income stability for many hourly and low-income workers.

Medicaid Churn in the Time of COVID-19: Temporarily Eliminated

Since the COVID-19 PHE declaration, which has precipitated lockdowns and large spikes in unemployment, states have seen significant increases in Medicaid enrollment. These surges have been driven by a combination of increases in the loss of employer-sponsored coverage and the relief legislation passed by Congress: the Families First Coronavirus Response Act (FFCRA).

Signed into law on March 18, 2020, the FFCRA provides states with a 6.2 percentage point increase in their Federal Medical Assistance Percentages (FMAP) for the duration of the PHE if they meet certain maintenance-of-effort requirements. Most notably, states cannot disenroll Medicaid beneficiaries for the duration of the PHE unless the individual is no longer a resident of the state or requests voluntary termination. The FFCRA provisions ensure that the most vulnerable populations remain protected during this crisis by guaranteeing continued access to healthcare. As such, the continuous coverage requirement has eliminated Medicaid churn during the PHE.

In January 2021, the Biden administration assured state governors that the COVID-19 PHE would remain in effect for the entirety of 2021 and states would be given 60 days’ notice prior to the termination of the PHE, ensuring that the enhanced FMAP and the continuous coverage requirement would continue through January 2022. This declaration provided state Medicaid agencies with much needed stability, allowing for the exploration of thoughtful and innovative approaches to the resumption of normal operations that could prevent potential mass disenrollment of eligible beneficiaries.

The pandemic has exposed significant flaws within our healthcare system, such as the barriers to access for many marginalized groups, but it has also provided states with a unique opportunity to challenge the old status quo. While the FFCRA has temporarily halted Medicaid disenrollment, there are policy and practice solutions states can explore to reduce churn and mitigate its impact when the PHE ends — many of which have been made temporarily available through the disaster relief state plan amendment (SPA) for the duration of the PHE, and can also be explored as permanent options.The most effective solution is 12-month continuous eligibility; the coverage continuity requirement has created a natural experiment to explore the impact of this option on cost and health outcomes.

The concept of continuous coverage is not new. Since the enactment of CHIP in 1997, states have had the option to allow children to stay enrolled in Medicaid for 12 months regardless of changes in their families’ income under the “continuous eligibility” option. To date, 33 states provide 12-month continuous eligibility to children enrolled in Medicaid or CHIP with analyses by California and Washington illustrating increases in enrollment and decreases in discontinuous coverage. For the adult Medicaid population, only two states (Montana and New York) have elected to provide continuous eligibility which requires a waiver and creates a more complex process for states, as Medicaid waivers must be budget neutral and are temporary, and therefore must be renewed.

Many have cited the cost of covering potentially ineligible individuals, resulting in a higher financial burden on states, as an argument for not pursuing continuous eligibility as a policy solution to churn. However, policy experts, advocates, and researchers argue that the benefits greatly outweigh the costs. Churn disrupts the entire healthcare delivery system and creates problems for beneficiaries, healthcare providers, payers such as Medicaid managed care organizations, and state agencies.

As mentioned, the pandemic has provided states with a chance to make more informed decisions about possible churn solutions. As such, states should assess current enrollment and renewal procedures that affect retention and explore opportunities to evaluate the impact continuous coverage has on care utilization and costs, as well as administrative costs.

States should also seek to explore additional strategies that improve coverage continuity such as policy and practice options to:

The pandemic has shown us that there is more that states can do to protect coverage stability and to advance access and equity within the healthcare system. It’s crucial that they prioritize policies like 12-month continuous eligibility that improve people’s health and financial security, while encouraging systems to work better for all.

Benefits Data Trust is working to help advance state strategies to improve continuous access to Medicaid by developing a toolkit to equip states with actionable solutions for reducing Medicaid churn. To learn more about that work — or to get involved — contact Jamila McLean: JMcLean@bdtrust.org.