Our nation’s uninsured rate is on the rise for the first time in a decade, according to the latest data from the Census Bureau, and declining Medicaid enrollment is a major driver. Overall, 1.9 million fewer people had any type of health insurance in 2018 compared to 2017 (0.5% decrease) – and this figure was even higher for Medicaid, which saw a net loss of 2 million people from its rolls (0.7% decrease).

When people who need Medicaid can’t access it, they are more likely to forgo medical care, have worse health outcomes, face catastrophic medical debt, and even have difficulty finding or keeping a job. There is compelling evidence that Medicaid literally saves lives: Economists at the Treasury Department recently published the results of a randomized controlled trial which found that gaining Medicaid coverage was associated with a 12 percent decline in mortality. What this tells us is that, as Medicaid enrollment continues to fall, it will likely take a human toll.

Fortunately, there are opportunities for states to efficiently connect more people to Medicaid. One of the most effective – and underutilized – strategies is Fast Track, a federal policy option that allows states to simplify the Medicaid enrollment process. The latest issue brief from Benefits Data Trust (BDT) offers a deep-dive into the benefits of Fast Track, provides a case study from Pennsylvania, and explains why more states should consider using this option. 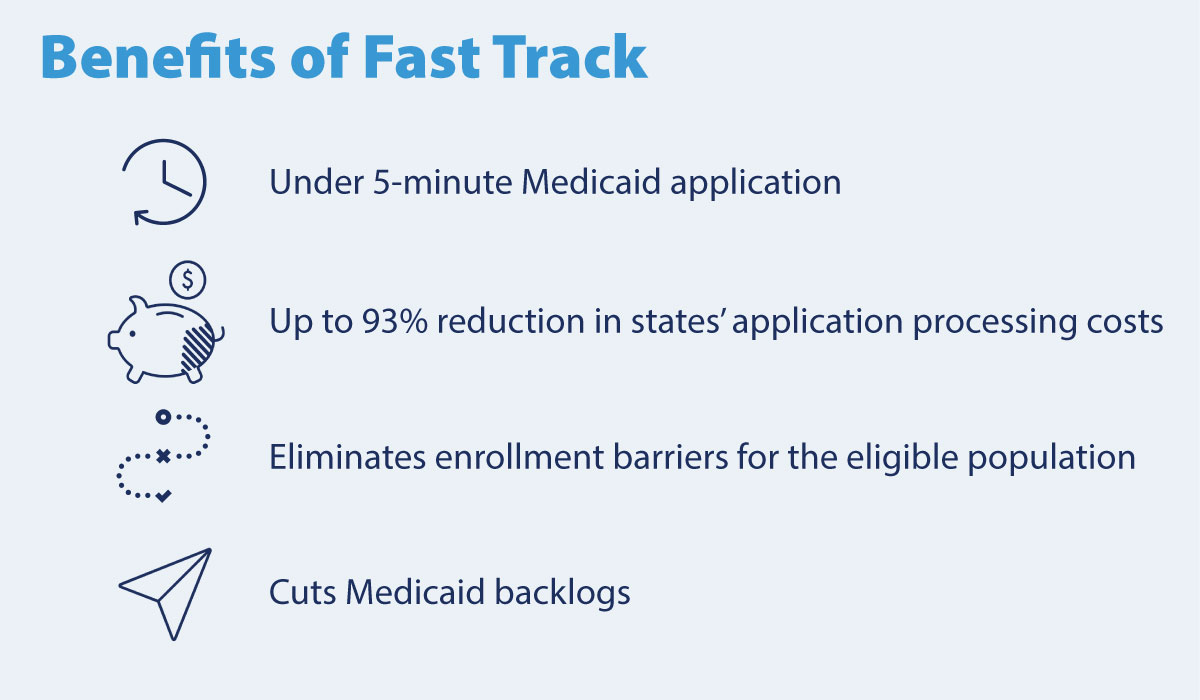 How does Fast Track work? By using data states already have on hand, Fast Track dramatically simplifies Medicaid enrollment. Instead of requiring a separate, often lengthy Medicaid application, under Fast Track states can instead use information from other means-tested programs – including Supplemental Nutrition Assistance Program (SNAP) and the Low-Income Home Energy Assistance Program (LIHEAP) – to automate the process of determining Medicaid eligibility. This makes enrollment much quicker and easier for everyone involved: applicants, state eligibility workers, and community-based enrollment assisters.

When Fast Track was first introduced in 2013, the Centers for Medicaid & Medicare Services (CMS) envisioned it as a way to help states manage the rapid influx of newly-eligible people who needed to enroll during the implementation of Medicaid expansion. Over the next three years, 12 Medicaid expansion states and one non-expansion state were approved for Fast Track under 1902(e)(14)(A) waiver authority, a temporary solution. CMS later created a Fast Track State Plan Amendment (SPA) option that allowed long-term benefit administration for both new applications and renewals.

Of the 37 states that have adopted Medicaid expansion, only 12 have used Fast Track – and most had waivers that are now expired. Today, just four states (Louisiana, New York, Pennsylvania, and Virginia) have active Fast Track permissions through an SPA.

BDT has seen the positive impact of Fast Track first-hand in Pennsylvania, where we worked closely with the PA Department of Human Services (DHS) to put policy into practice. From January 2016 to October 2017, we helped DHS secure a Fast Track waiver and enroll over 37,000 people into Medicaid, with substantial administrative savings for the state. Whereas a typical Medicaid application takes about 40 minutes for Pennsylvania caseworkers to process, Fast Track applications required no further action on the part of the caseworker. The project was so successful that, in late 2017, the state institutionalized Fast Track through a State Plan Amendment (SPA). This will allow eligible Pennsylvanians to enroll seamlessly into Medicaid for many years to come.

The evidence is clear: Fast Track is a cost-effective way to improve the Medicaid enrollment process for applicants, community-based enrollment assisters, and state eligibility workers alike. At a time when the uninsured rate is on the rise, Fast Track offers a huge opportunity for states to efficiently connect large numbers of people to Medicaid and improve access to needed healthcare.