Hello, you are using a very old browser that's not supported.
Please, consider updating your browser to a newer version.

People who work in the health and human services sector often tout principles for good service delivery such as “meet people where they are” and “no wrong door.” We all nod our heads in agreement when we hear these phrases uttered at conferences, but what do they actually look like in practice? What does it mean to actually “meet” someone “where they are” and how do we know where to find them?

BDT’s recent collaboration with Colorado’s Department of Health Care Policy and Finance (HCPF, the agency that administers Medicaid) shows what it can look like and how it can change people’s lives. In 2018, BDT worked with HCPF to enroll people under 60 years old who receive both Medicare and Medicaid (“dual eligibles” or “duals”) in the Supplemental Nutrition Assistance Program (SNAP, known as Food Assistance in Colorado). This population was regarded as particularly hard to reach because many of these dual eligibles have disabilities and therefore face heightened barriers to access. Although attempts have been made, state agencies and community-based organizations have faced challenges successfully outreaching to this group in the past. Additionally, a significant portion of this population resides in rural counties, further exacerbating difficulties of contacting the households and getting them enrolled in SNAP.

Before we could even begin to meet people where they are, we had to figure out who and where they were. We used data-driven strategies to identify the target population, partnering with HCPF and the Colorado Department of Human Services (CDHS, the agency that administers SNAP) to cross SNAP and Medicaid enrollment data. This data match produced a list of individuals enrolled in Medicaid but not SNAP and who are likely eligible for SNAP, because nearly everyone eligible for Medicaid is also income eligible for SNAP. Although we knew the match would yield a high number of eligible unenrolled households, the results demonstrated even higher numbers than expected. At the onset of this project, BDT’s Policy, Programs, and Data Science teams projected that we would find 9,000 eligible unenrolled individuals to reach out to; however, the match ultimately resulted in a total outreach pool of nearly 13,000 by the end of the project, 42 percent more unenrolled duals than we initially projected.

Once we knew who we wanted to reach and where to meet them, we had to figure out how to best communicate with them. Colorado is a diverse state and we knew from our outreach to Coloradans over 60 that people in urban centers like Denver respond differently than people living in more rural areas. As a result, we created tailored messages for populations based on where they lived as defined by their zip code.

In urban areas, we used BDT’s traditional outreach letter which is signed by the Executive Director of CDHS and co-branded with both the Colorado Benefits Center (powered by Benefits Data Trust) and CDHS logos. The letter informs the recipient that they are likely eligible for SNAP and urges them to call BDT’s Colorado Benefits Center for help applying over the phone. This letter has proven effective for BDT’s ongoing work helping individuals enroll in SNAP, eliciting response rates around 15 percent in urban Colorado. However, this same letter has gotten response rates below 10 percent in rural areas.

Because BDT has had a harder time reaching rural Coloradans with our traditional letter co-branded with CDHS in the past, we tried different messages tailored to rural populations in order to get a better response rate for this outreach list.

In rural areas, we tested four different letters to see which would be most effective. For those who did not respond to the new letters, we sent our traditional letter as a follow up. One of the new letters we tested for rural populations highlighted the fact that the U.S. Department of Agriculture, an agency that is widely known by farmers, administers SNAP. Moreover, this letter made an explicit connection to the future of rural communities: “We want to bring food resources to your table so rural communities can grow strong.” This letter performed well, with a 14.8 percent response rate in rural counties, an increase of more than five percentage points compared to our traditional letter.

We also tested a letter signed by someone at BDT, rather than a state government official, to see if it would get a better response in areas where people may be more reluctant to participate in government programs. This “non-governmental” letter identified the Colorado Benefits Center as a “non-profit organization” and was not co-branded with a government agency. This letter performed even better than the USDA letter with an overall response rate of 25 percent in rural Colorado, an increase of over 15 percentage points compared to BDT’s traditional outreach in rural areas. 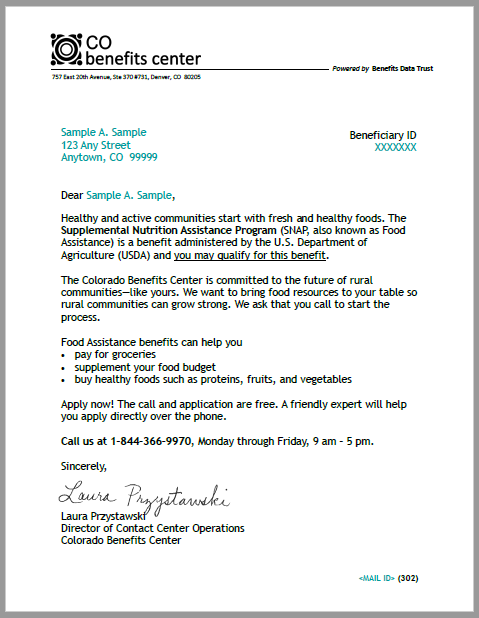 Lastly, we tested two “trusted-source” letters co-branded with well-known local organizations, the Center for People with Disabilities and The Independence Center, to see if this would increase the response to the letters. Tailoring messages and the presentation of our mail outreach proved effective: trusted-source letters more than tripled response rates from 9.7 percent to 39 percent and 32.6 percent, respectively, in counties with historically low response rates.

We also piloted the use of text messages and outbound phone calls to reach those who didn’t respond to initial outreach letters. Using text messages proved highly successful: adding text reminders to mail outreach increased response rates by more than 10 percentage points, from an average of 15 percent to over 26 percent.

While there are still over 12,000 dual eligible persons under age 60 who are likely eligible and not participating in SNAP, this project delivered much-needed food assistance to hundreds of low-income Coloradans. Over the course of six months, BDT submitted SNAP applications for 739 hard-to-reach dual-eligible households and secured an average of $1,164 per year in benefits for over 500 of them. This project effectively increased the incomes of households assisted by over 11 percent, from an average of $14,400 to over $16,000 annually, by helping eligible duals enroll into SNAP.

The lessons learned through this project carry important implications for BDT and the broader health and human services sector. The results show the value of tailoring messages and methods in order to meet people where they are. Using local partners to brand outreach and adding text messages substantially increased response rates. As we implement new projects, it is critical to ask: What are the demographics of the target population, and how can we effectively communicate with them? Taking the time to do this research and test different messages and media proved worthwhile. This is how we can truly “meet people where they are” in person-centered programming.